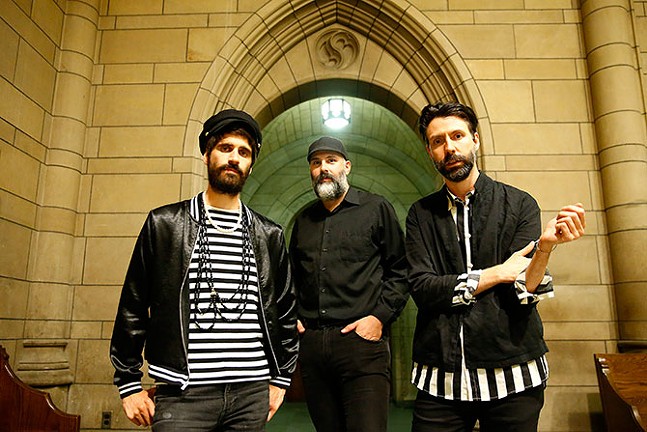 “[Pierce] reached out a month or two ago [about] a solo tour for his new album,” says Ley. “He was like, ‘Yeah, I’m coming to Pittsburgh, and I’d really like to play with you”… and he said early October, so I was like, ‘Ok let’s make it happen.’ So we kind of like pushed things ahead of schedule to accommodate. Which is good, sometimes you need that incentive to get things done.”

At the time of that conversation Ley, Chamberlain, and Gallo had no completed songs, hadn’t been rehearsing, didn’t even have a full band lineup or name, and had no online presence.

“We’d been focused on arrangements and composing new ideas,” says Ley. "[Gallo] and [Chamberlain] have really been agonizing over mixes to make sure things are a higher quality then there were previously. That was the primary focus for so long, so when the show presented itself, we were like, ‘Oh, we actually have to be a band. We need to get out of these bedrooms and studio spaces and present ourselves to other humans.’ We recognized what we were doing only existed in this weird vacuum.”

To start the process, they picked a name — Chariot Fade — and began browsing through their collection of ideas to choose how they would debut themselves. They settled on two songs, “Witness to a Lover” and “Spotless Century,” the latter a track that had been in the works since the end of delicious pastries, when the future of the band was unclear.

“The reason we chose [“Spotless Century”] was that it kind of acted like a nice transition from what we were doing and the direction that we were going in,” says Ley. “There are elements in it that will seem kind of familiar, like there’s a lot of '60s pop influences and then it sort of abruptly changes into something a little bit more electronic, a little bit more dance-y.”

On Feb. 1, delicious pastries, made up of Gallo, Ley, Chamberlain, along with Burr Settles, Dan Styslinger, and Vince Poprock, played their last show together at Howlers. The members realized that, after 10 years, their sound was shifting — from a classic '60s pop songwriting to music with heavy basslines, drum loops, and synthesizers — and it was time to put an end to the project.

The second song Chariot Fade chose to put out, “Witness to a Lover,” leans heavily into the new sonic direction of the group, with samples and electronic drum programming. It’s on the other end of the spectrum musically, and the members felt the two songs offered a good representation of the new band.

“The reality is that elements of what we’ve always done are still present because the primary creative forces of the other group are still intact and a lot of those songwriting tendencies don’t necessarily disappear just because you’re doing a new thing,” says Ley. “I feel like there’s familiar elements, but there’s also moments that feel like stretching and pushing further in a new direction. So, ‘Spotless’ is a good place to start. Hopefully it will lead [listeners] into what’s to come.”

Since Chariot Fade’s lineup is not yet finalized, they recruited friends to fill in the empty spots on bass and drums for their debut show at Spirit. Sports Metaphors guitarist and vocalist Dane Adelman will be on the bass and Rave Ami’s Evan Meindl will play the drums.

“It was funny, the amount of attention we were putting into scrutinizing these decisions,” says Ley. “We have the luxury of transitioning out of a project that had a certain level of visibility in and around the city. … [But] you don’t realize how insular the process is when it’s completely new. It’s been such a long time since I experienced being involved with something nobody knows about. … We didn’t have to make a Myspace page though, so that was cool.”

Theatre of the Oppressed Pittsburgh to address homelessness with H.U.D. (Housing Under Distress)